3. So, yes, it’s an odd time to bring up the holiday season song “Sleigh Ride.”

Actually, it’s not. On this date 108 years ago, the composer of the song, Leroy Anderson, was born.

“Sleigh Ride” is Anderson’s best-known work. It’s far from his only one.

In fact, the piece I associate him with most is “The Syncopated Clock.”

4. If you’re from the New York area and are my age or a little older, you’ve heard “The Syncopated Clock.” You just might not know its name.

You know it because it was the theme of “The Late Show,” the movie that WCBS-TV, Channel 2, aired right after the 11 p.m. news. It’s what the station put up against “The Tonight Show” with either Steve Allen, Jack Paar or Johnny Carson.

Here’s a link to a YouTube video showing the opening: https://www.youtube.com/watch?v=k3cl6QoZSDw

“The Late Show,” of course, is now the name of CBS’ talk show that follows the local news at 11 or 10, depending on your time zone. First, it was David Letterman’s show and now it’s Stephen Colbert’s.

It’s strange that I encountered the Leroy Anderson birthday. Because I’ve been thinking a lot about what has changed in my life in 62-1/4 years (minus 3 days).

The first thing you always think of is the technology. I’m writing this not at my desk at home, but in beautiful Rockland Lake State Park.

I’m using a 5-1/2-year-old iPad – Apple calls it “vintage” but in the late 1960s or early 70s I would have called it a miracle. I would have been able to sell tickets so that people could watch me use it. 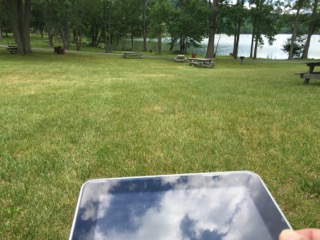 I’m also listening to a playlist of 70 songs on my iPhone – back then, I would have need a giant turntable, speakers, some kind of receiver, six or seven vinyl LPs and a place to plug all this in. It would have taken me about four trips to the car just to get the stuff to listen to.

You get the idea.

And yet, a lot of the radical changes in our life are tangental to the technology. You can’t say they’re divorced from it, because tech influences everything.

Here’s a case in point:

Look at your neighborhood or the town where you live. In the 60s and 70s, you could avoid shopping malls, which were a relatively new phenomenon, by buying stuff around the corner. Shoes. Clothes. Toys. Records. A baseball glove.

Now, the only communities where those types of stores exist are crafts communities, places aimed at attracting tourists or day trippers. Now, the only commerce conducted in villages is usually take-out food, convenience stores, beauty salons and places to work out.

That change, the decline of the local merchant, is partly due to the efficiency of the mall, the big-box stores and the warehouse clubs, and partly to the full blossoming of online shopping. A world of Amazon boxes on doorsteps.

We used to need phone books and the Yellow Pages. When was the last time you used one?

We used to deposit mail in corner mailboxes. About the only place to drop off mail now is the local post office.

So here’s how “The Syncopated Clock” and “The Late Show” come in.

It might come as a shock to those of you in your 40s or younger, but when I graduated from high school 44 years ago this week, TV stations went off the air in the middle of the night. And, of course, all stations were local – there was no cable.

Most of them broadcast until 1 a.m. or so. Then after whatever they played last was done, there would be a booth announcer – a guy who read stuff on the air live – who would first read that the station followed the broadcasting standards of good practices. Whatever they were. I assume now that they meant that people weren’t going to curse on TV, but who knows.

That was followed by some sort of sermon, usually – but not always – delivered by a Christian minister (I could swear that I saw a rabbi once). Then the announcer would say that the station had concluded another broadcast day, and that programming would resume at 6 a.m.

Then there was a film of an American flag with “The Star-Spangled Banner” playing in the background. Sometimes, the film got creative and included places such as the Capitol, Mount Rushmore and the Statue of Liberty before ending with the fluttering flag.

Then there was silence and a gray fuzzy screen.

And then came the test pattern. For most of my childhood, it was in black and white, since my family got its first color TV set in 1968. The test pattern showed the name of the station and was accompanied by a high-pitched tone.

And it would run for the next several hours.

When I was little, and would wake up early. I would scamper to the TV and turn it on just before the station came back on the air. Somewhere around 6 a.m., there would be that wonderful moment when the test pattern all-of-a-sudden ended.

Just like that. It wasn’t that hard to make me happy back then.

First, there was the gray fuzzy screen. Then a different announcer would tell you it was the start of the station’s broadcast day. Then there would be that “Star-Spangled Banner” film, the reminder about the mysterious good practices, another sermon and then the early morning programming – I seem to remember a lot of education films for the farmers, of which there were few even back then in metropolitan New York.

“The Syncopated Clock” symbolizes the end of that world to me.

Channel 2 used it to introduce “The Late Show” at 11:30. My Mom, from whom I get my abysmal sleeping habits, would stay up to watch it.

When I was a teenager, and could stay up with her, I remember being introduced to some classic films by “The Late Show.”

One was called “The Big Carnival,” a movie about a shady reporter that was released in theaters as “Ace in the Hole.” It starred Kirk Douglas and, if you haven’t seen it, it is in many ways one of the darkest films ever made.

Another was “It’s a Wonderful Life.” Watching it on “The Late Show” in the weeks around Christmastime was how most people were introduced to it. The intimacy of the small screen probably helps its impact on an audience.

And finally, it reached the next day. TV was on 24 hours a day. Other stations followed suit. Local stations left movies mostly for the cable channels. The test pattern and fuzzy gray screen and sermons and national anthem all disappeared.

Or maybe they didn’t. I don’t watch TV much, and especially at 3:30 a.m. If I did, I’d watch live news on CNN or a movie on HBO or the prior evening’s Mets game. I wouldn’t watch infomercials or old sitcoms, but they’re around, too. Maybe there’s a test pattern I haven’t come across yet.

So “The Syncopated Clock” is kind of a Rosebud for me. It reminds me of a different time when I was younger and things were different.

For those people, all today is is the 108th birthday of Leroy Anderson, who wrote “Sleigh Ride.”

And they’re ticked off that I’m putting a holiday song in their head six months ahead of Christmas.