2. It is gorgeous today just north of New York City.

The sky is a perfect blue with a few unthreatening clouds. Despite a recent drought, the trees are especially green.

Combined with Rockland Lake, which is about 50 feet in front of me, blue and green dominate my view.  There’s a little brown in the dry, soft ground. There’s the white and a touch of gray in the few clouds. And that’s it.

It’s 83 degrees this afternoon. That’s not as hot as it’s been; we had a two-week stretch when the heat index topped 100 degrees routinely. There’s a nice breeze today, maybe 6 or 7 mph, and it’s not humid at all. 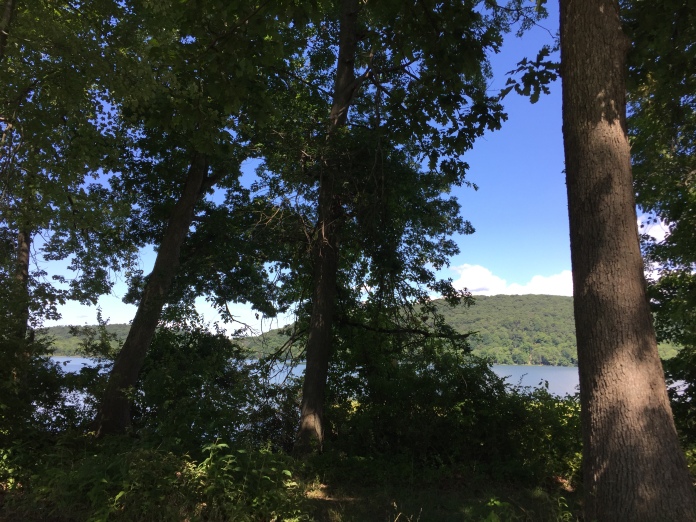 But I’m sitting here in blue cargo shorts and a Mr. Met orange t-shirt and a new pair of brown deck shoes. Admittedly, the shirt doesn’t blend well with the overall background. But the Mets beat the Yankees 7-1 last night, so forgive a little joy and visual dissonance on my part.

There are people in the park. A boy about five or six riding a bike with training wheels. A young couple wheeling an infant in a stroller with a red canvas top to block out the sun. A good-sized, balding muscular guy in his 50s wearing a blue sleeveless shirt and gray shorts with his earphones planted in his ear.

I’m here to write. In the next half hour or so, I’ll pack up by black folding chair, my green cooler bag and this iPad, and head home. Tonight, I’m firing up the gas grill for these weird beef-chicken burgers I bought at Stew Leonard’s. Since it’s late Vidalia onion season, I can grill that, too. Later, I’ll scoop some vanilla ice cream into a bowl with a mess of fresh blueberries from New Jersey and some whipped cream.

The sun will set just after 8, so there’s a chance my wife and I might go back to the park.  I’ll walk around or sit in the car and reflect. My wife is still big into Pokemon Go, so she’ll be hunting augmented reality creatures and getting restocked at the park’s several Poke Stops. We’ll discuss going to the Nyack farmers’ market tomorrow and how we’ll spend a rare weekend without commitments.

3. Of course I’m not talking about January 28, 2017. I have no idea if this is a freaky mild winter’s day or something more typical – gray, cold, dark, maybe a little snow, maybe a lot.

But I wrote this on August 3 and delayed the post until now.

Why torture myself – and you – on such a winter’s day?

For one thing, to celebrate the day I’m writing this. This is as perfect as it gets, and I wanted to capture the feeling because I know it doesn’t last 365 days. I suppose today is the argument for moving to San Diego, but I’m not quite ready to leave New York with its ever-changing weather.

The other reason I wrote this in August and posted this today is to offer hope. No matter what today is like, whether it’s a miserable mid-winter day or one that’s sunny and above 40 degrees, perfect days like the one when I wrote this are on the way.

They might take awhile. But five or six months from now, the sun will shine, it will be warm enough to dress lightly, and we’ll again be in the throes of summer. Grilling and biking and sitting by a lake enjoying the blues and greens.

One thing I don’t know when I post this is what happened in the election in November.

If, by some fluke, Trump won, forget everything I said. There is nothing to look forward to, and a beautiful day like the one on which I wrote this will be a sad memory of a time before madness.

Please tell me that didn’t happen.